Port of Kribi: selection of 1,000 people to work in the appliance factory starts

DEVELOPMENT IN CENTRAL AFRICA: 1,000 jobs in sight in a project to build an electrical appliance production plant in the port of Kribi

At the entrance to Mboro, the port of Kribi in deep water in the southern region of Cameroon, earthworks are underway on an area of 20 hectares. At this site located a stone's throw from the Kribi-Lolable highway, the electrical and air conditioning equipment industrial company (Sicamec) will start construction work on a production and assembly plant in early 2020. refrigerators, freezers and air conditioners. This investment is officially estimated at FCFA 45 billion.

On 21 August 2019, the CEO of this Cameroonian company, Alkis Bruno Domyou Noubi (photo), 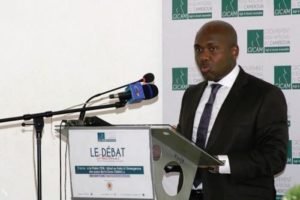 signed with the general manager of the Autonomous Port of Kribi (PAK), Patrice Melom, the agreement for the establishment of the future Sicamec plant in the industrial zone of the deep-water port of Kribi. " This is the first time that we sign such an agreement with a completely Cameroonian company ', says Patrice Melom.

In addition to being the first company with Cameroonian capital to obtain a settlement agreement in the industrial zone of the port of Kribi, Sicamec is also the bearer of the project that, for the time being, will have the greatest impact in terms of job creation. Indeed, thanks to its plant with a production capacity of 15,000 units per month (5000 air conditioners, 5000 refrigerators and 5000 freezers), this company intends to create 1000 direct jobs.

The threat from the flea market (second hand)

Once the factory is built (it will be ISO 9001v2015 certified), these employees will have to work hard, 24 hours a day, 7 days a week, so that " household appliances produced in Cameroon can conquer the African market "Sicamec's CEO aspires. But, emphasises Alkis Bruno Domyou Noubi, " we will not succeed without institutional support ".

In fact, according to the market study for this project, conducted by JMJ Africa, the consumption of freezers and air conditioners in Cameroon in 2018 is estimated at around 150,000 units. This national consumption is projected to reach 250,000 units in 2024. However, the study reveals that 62% of this market is controlled by imports of second-hand products, commonly known as flea markets.

Faced with this reality, it is argued at Sicamec, the project to build a plant for the production and assembly of household appliances in Kribi could only be competitive if measures are taken to reduce imports from the flea market, with a view to commissioning the plant in 2022.

" We do not fear competition from new imported products. The main threat to the feasibility of this project is the import of second-hand products "much of which escapes the tax and customs circuit,' says a Sicamec official