The Franc area is the monetary union between countries whose currencies were tied to the French franc.

It is made up of former colonies of the French Empire which, having achieved independence, chose to remain in a homogeneous whole characterised by a common exchange rate system. 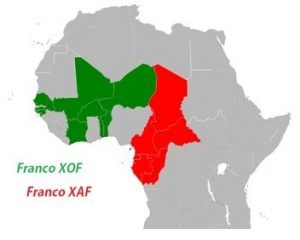 The franc area consisted of:

a) by France, the Départements d'Outre-mer (Guiana, Guadeloupe, Martinique, Réunion) and the collectivités of Mayotte (Indian Ocean) and Saint-Pierre-et-Miquelon (in the Atlantic off the Canadian coast), where the legal currency was the French franc, issued by the Banque de France and, for the DOMs and collectivités, by the Institut d'émission des départements d'outre- mer-IEDOM;

The 14 African states are divided into two unions:

in the UMAC is the Banque des Etats de l'Afrique Centrale (BEAC).

In the Pacific Territories, the issuing institution of the CFA franc is the Institut d'émission des territoires d'outre-mer-IEOM.

In the Comores, the issuance of paper currency of franc comorien is carried out by the Institut d'Emission des Comores, a currency board attached to the French Treasury, while the metal currency is issued by the Banque Centrale des Comores (BCC), a joint venture of the State of the Comores and the French Republic.

Effects after the introduction of the euro.

With the start of the third stage of EMU, from 1.1.1999 the French franc has been replaced as legal tender by the euro even in overseas departments and communities.

In the DOMs and collectivités, the tasks of issuing legal tender within the framework of the ESCB were taken over by the Banque de France (ordonnance n°2000-347 du 19 avril 2000).

IEDOM was retained as an institution under public law, but it issues currency on behalf of and under the control of the Banque de France; however, it continues to perform tasks on behalf of the state (e.g. coin circulation) and on behalf of third parties and also operates as an economic observatory.

For the currencies of the 14 African states and the Comores, the peg to the franc was replaced by a peg to the euro.