From hotels to stadiums: Italy's investments in Cameroon are growing 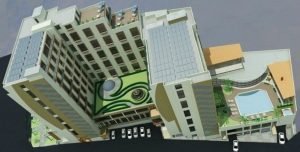 It will be one of the most beautiful and luxurious hotels in Douala and will be the first five-star hotel in Cameroon.

The Kristal Palace will be built in Douala, the country's economic capital, will have 240 rooms and bear a double Italian signature: that of the Milan interior design studio Premoli Silva, which realised the project, and that of Tecno Spa, as general contractor.

The furnishings are inspired by the country's cultural tradition, from the use of iroko, wengee and zebrano woods to the graphic designs of Bamikeke fabrics. All revisited, however, in a modern key and dedicated to a decidedly business audience.

Construction work on the hotel has already begun, as has the construction of the sports citadel and stadium in the capital Yaoundéwhich will host the 2019 edition of the African Football Cupthe maxi-project, in the form of a PPP or public-private partnership, was won by Italian Picciniwhile the company Pizzarotti is already at work to build a brand new 120,000-housing district using the social housing formula.

Italian investments in Cameroon are growing. The country has 24 million inhabitants, is bordered by the Gulf of Guinea and lies on the border with Nigeria.

The Promote exhibition, the largest economic partnership promotional platform in the whole of Central Africa, saw Italy as the guest of honour the other year, and Deputy Minister Giro, the only representative of a foreign government, said:

"The trip we took with President Mattarella in 2016 was not a commercial. There was a clear growth in consideration of our country. Casa Italia, our pavilion at the Promote Show that closed yesterday, was the second largest of the entire event."

To tell the truth, the difference between Casa Italia and the French pavilion was minimal, it must be said that the French in Cameroon have much longer roots but Italy is consolidating its positions.

During the bilateral Italy-Cameroon Economic Forum last Wednesday, new projects were announced: a consortium between Italferr and Seas will be responsible for the construction of new infrastructure in southern Cameroon, on the border with Gabon; Iveco, on the other hand, will apparently be working with the Ministry of Transport on the development of the urban network in Douala.

"Historically, the presence of Italian companies in Africa refers mostly to large groups such as Eni, Danieli, Enel, Salini or Impregilo. Yet sub-Saharan Africa can provide commercial outlets for Italian products and services in many sectors, from construction to furniture, from machinery to agribusiness'.

Africa, it seems, is ready to receive Italy's medium-sized companies.

A good example is the producer of Broli pasta, which, together with some Italian partners, has seen fit to set up and has made investments in Cameroon amounting to some EUR 5 million, or the many Italian companies that are winning important supplies for the sector HORECA ahead of the 2019 African Cup of Nations. These companies include Habitat Group, a company from Recanati that designs and builds hotels and shopping centres: for the sake of the news, we must tell you that the company, in Cameroon, has already built a 4-star hotel, while it is now working on Mama Italya franchise concept for the production and sale of Italian products.

Cameroon's economy is based on raw materials, largely from wood to the 400 million barrels of oil reserves.

The country is now betting everything on the maxi-infrastructure plan wanted by the local government, Deputy Minister Giro said:

'In Yaoundé we signed an ambitious programme: Italy is to be given very important infrastructures to build in the coming years'.

Together with Germany, Italy is Yaoundé's second most important economic partner among EU countries, while the absolute number one still remains China.

Ties with Europe, however, are destined to grow: since last August, the Economic Partnership Agreement with Brussels has been in force, thanks to which European products will gradually, within ten years, be able to enter Cameroon at zero interest.

Deputy Minister Giro not only brought companies to Cameroon but also two universities: the one for Foreigners of Sienawhich signed an agreement with the Cameroonian Ministry of Secondary Education to teach Italian in the country's high schools, and that of Paduawhich signed three cooperation agreements with the universities of Yaoundé and Douala for courses and master's degrees in:

"Cameroonians make up the largest community of African students in Italian universities, numbering around 4,000, and most of them then return to the country and set up new businesses.